These healthier banana muffins are super moist and loaded with so much great flavor. My favorite muffins! 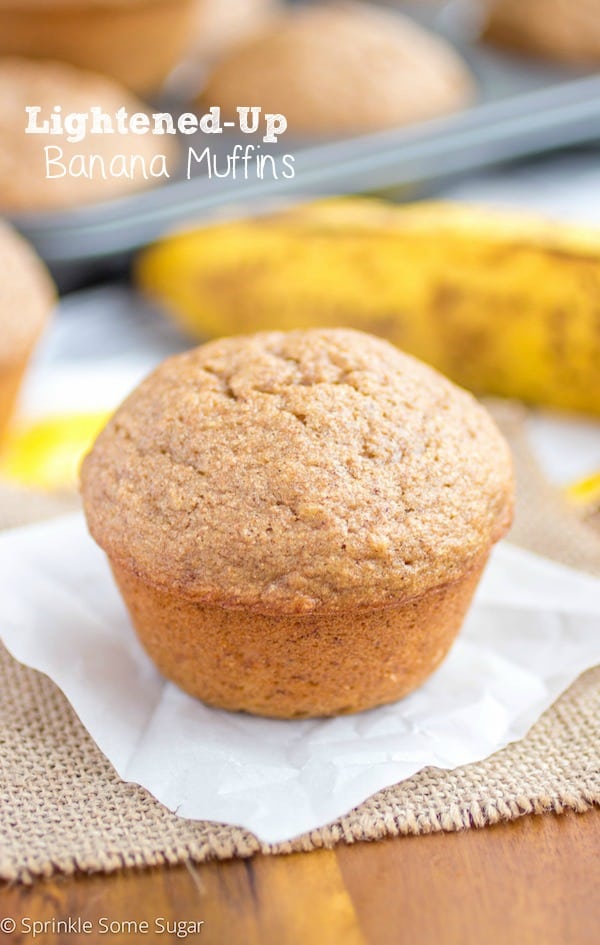 There’s just nothing like the sweet aroma of banana (anything) muffins in the oven wafting through your house. These lightened up banana muffins are my absolute favorite muffins ever. ever. ever. They use healthier ingredients and clock in just under 200 calories per muffin. Score! Plus, they are seriously delicious!! And, after a day like yesterday, where you eat alllllll day long (wait.. football was on? I thought it was a mini Katy Perry/Missy Elliot concert.. p.s Missy Elliot KILLED IT), these lightened-up banana muffins are a great healthier treat to get back on track. 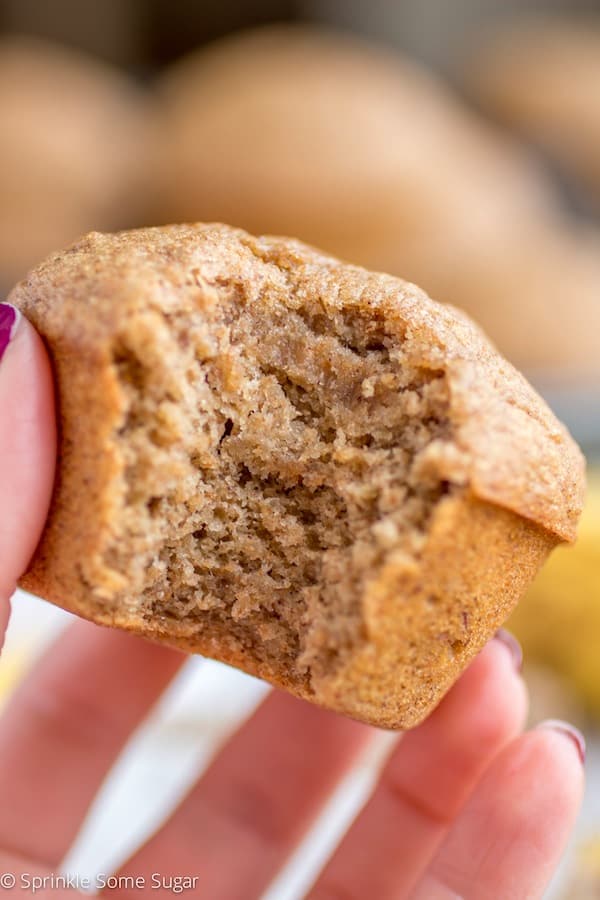 I do think I should point out though that of course I do realize that there is a whole whopping cup of brown sugar in these so I wouldn’t consider these “healthy” they just use “healthier” ingredients. But for me, considering the muffins I make from time to time, these are definitely a healthier option. You can of course feel free to use less. I have successfully used 3/4 cup and they still taste awesome. I’m guessing you can even get away with using even 1/2 cup if you want a less sweet muffin because you still get sweetness and flavor from the bananas. 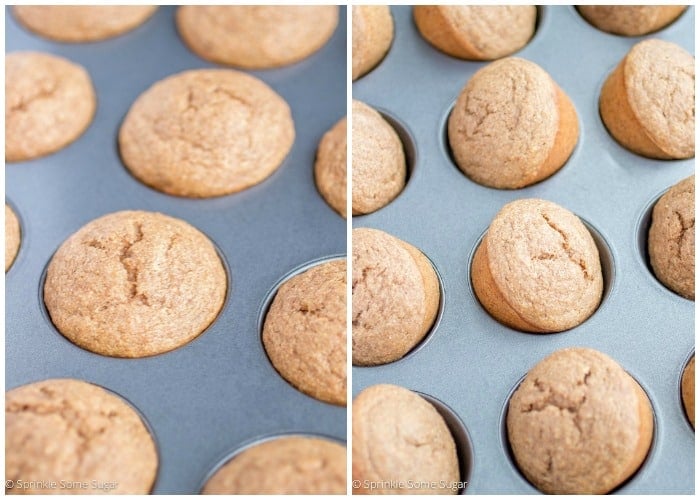 You may remember these muffins because I posted them a while back. Good god, thankfully my photography has improved! Ha!! And they are STILL my favorite banana muffins eva.
I have tried so many and I mean SO many muffin recipes using whole wheat flour and basically every single one leaves a bland, almost cardboard like taste behind or they are dense and heavy as bricks. I know you know what I’m talking about. And that is why I adore these muffins because you can still get the benefits of using whole wheat flour without compromising flavor AND texture! You really would never know. They are extremely moist and so super flavorful, it’s ridiculous. 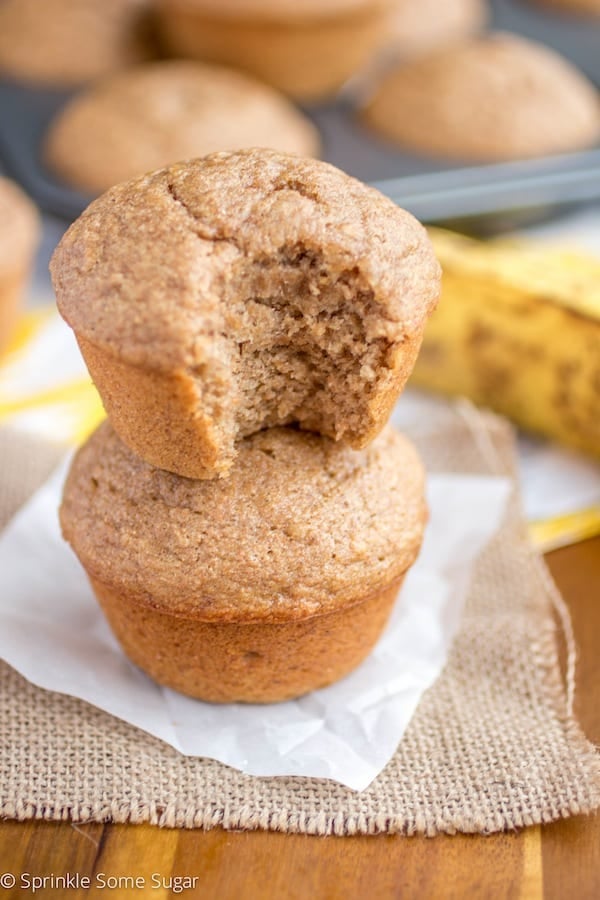 Once I bake my muffins and they are completely cooled, I like to freeze them. How I do this is, I wrap each muffin individually and then they all go into a large freezer bag and they will keep for up to 3 months. You just have to pop them into the microwave for 20-30 seconds and they are good as new! Personally, I think they taste even better this way.
I just love these muffins and I hope you love them too!
[pinterest]
Print
Lightened-Up Banana Muffins

Scoop batter with an ice cream scoop into prepared muffin tins all the way to the top. Bake for 19-22 minutes or until a toothpick comes out with just a few moist crumbs. Let muffins cool in pans for 5 minutes or until cool enough to handle without burning yourself then transfer to a wire rack to finish cooling. This is important because muffins will become dry if they are left in hot pan too long.

Muffins will keep for 7 days stored in an airtight container. To freeze, let muffins cool completely then wrap each individually in plastic wrap and place in a large plastic freezer bag. Frozen muffins will keep for about 3 months (if they even last that long!).

*You may lessen the amount of brown sugar (to taste) to make these healthier.

*You may use regular yogurt in place of greek yogurt. 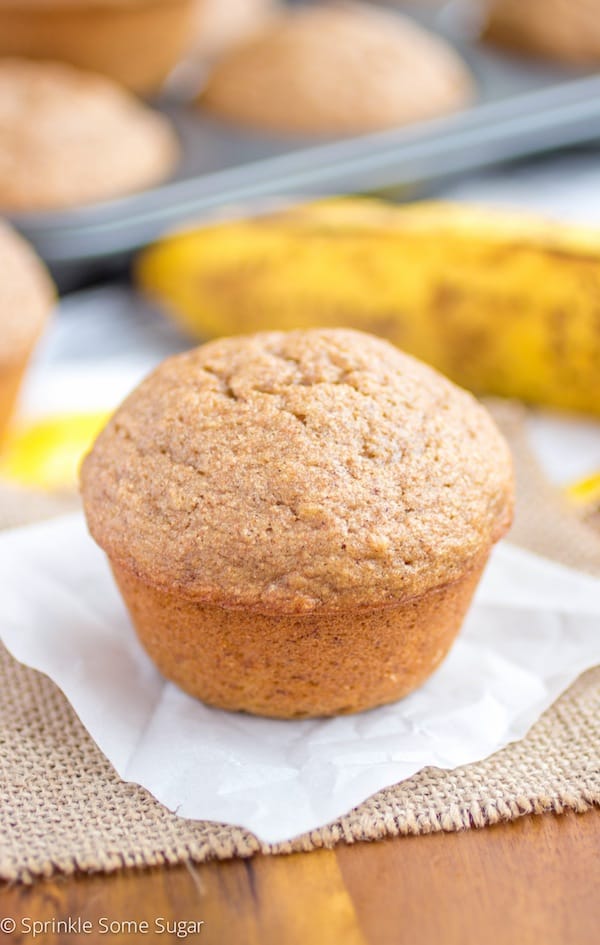