Can you ever go wrong with peanut butter and chocolate together? One of the greatest combinations ever made. I am always trying to come up with new things that I know mike will love and I always know that anything I make with peanut butter and chocolate he will devour. And I was right, he LOVED these. I used this same frosting to frost a chocolate cake I made for his birthday, so I knew he’d love these just as much. I topped my favorite fudge brownies, the same ones I used here and here, with my absolute most favorite peanut butter frosting. I use this frosting for everything! Frosting cakes, cupcakes, etc. You will never ever need another peanut butter frosting recipe again, believe me! The brownies are so fudgey and so dense. It is the only brownie recipe I use! 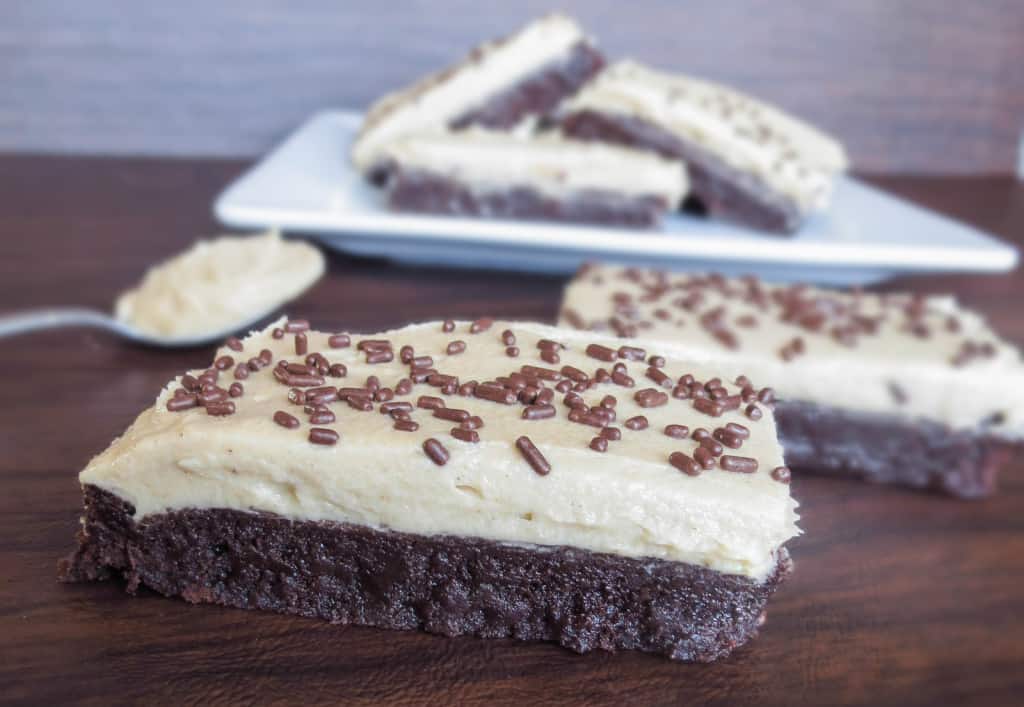 The small amount of cream cheese in the frosting is only used for creaminess, you absolutely cannot taste it at all. It is packed with peanut butter flavor with a slight sweetness from the sugar which gives it just the amount that it needs. It is not overly sweet, it is the perfectly balanced. It is just so, so, so good!!! I always find myself eating half of it before it gets on my desserts, and I know you will too!

Preheat oven to 325°. Line a 9x9 baking pan with parchment paper, overlapping each side - this makes it much easier to pull out to cool and cut. Set aside.

Pour the batter into your prepared baking pan and smooth it out until level. Bake for 25-30 minutes or until a toothpick comes out slightly moist with a little bit of batter left on it - this is what makes them fudgy!! Let them cool in pan for 5 minutes then pull out using the parchment paper and set on wire rack or counter to finish cooling completely. While brownies are baking, start preparing your frosting.

Cream together butter, cream cheese and peanut butter until combined. Add in the salt and powdered sugar and mix until completely smooth. Once brownies are completely cooled you can frost them. If using, add sprinkles on top. Cut them into squares with a wet knife and serve!