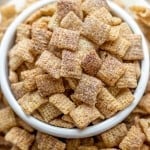 Crunchy rice chex cereal is coated in cinnamon sugar for the easiest and most addicting snack ever created. *This post was originally written and published on April 2, 2014. It is now one of the most popular recipes on my blog! I left the post as-is and updated with new photos.* This cinnamon sugar chex mix is crunchy cinnamon goodness. Seriously, I can not keep my hands off of this stuff! I … END_OF_DOCUMENT_TOKEN_TO_BE_REPLACED