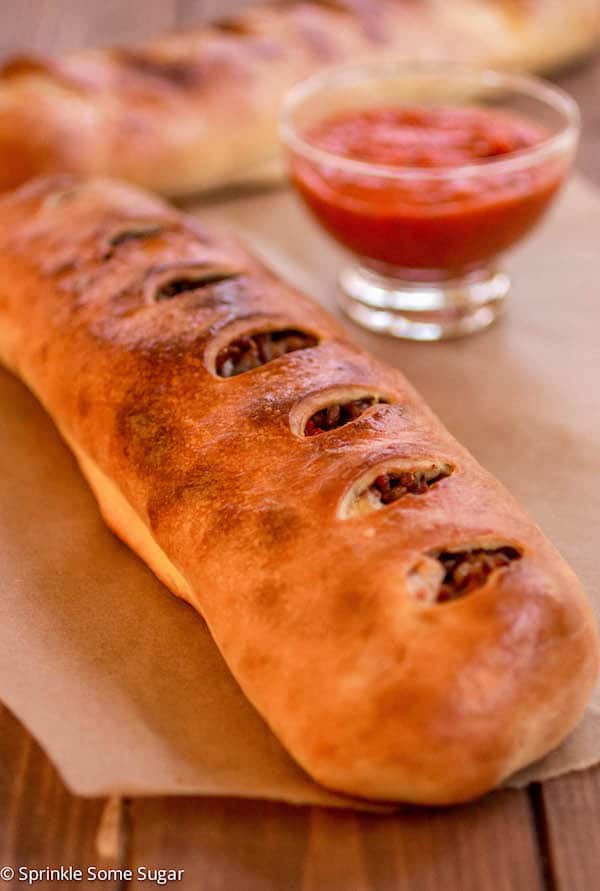 If there’s one thing I love more than pizza, it’s a big fat, meaty, melty, cheesy stromboli! Which is essentially just pizza in a different form but who’s judging? I made this stromboli for you guys because it is one of the easiest, most delicious appetizers you can make. Heck, you can even have it for dinner! These strombolis come out perfectly shiny golden brown, crispy and SO delicious. The filling is so insanely flavorful that you will want to eat an entire one all to yourself! 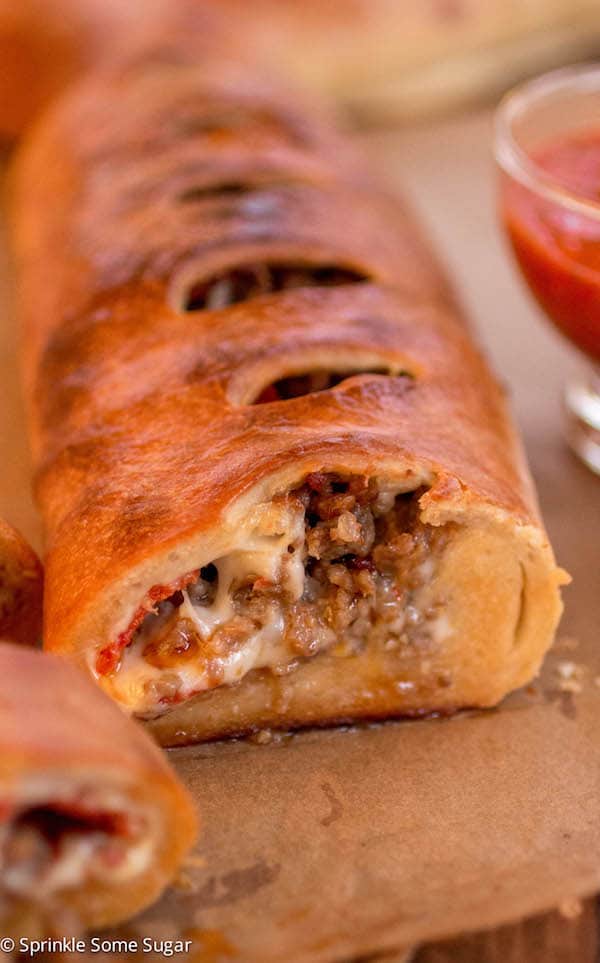 While you can make stromboli using any of your favorite meats and cheeses, this one in particular is made with Johnsonville Ground Italian Sausage and it’s my absolute favorite! This ground sausage is seasoned to perfection already so you don’t even need to season it! Seriously, it is SO ridiculously flavorful that I could not stop eating it before filling my strombolis. Whenever I make these strombolis, I’ll never use a different kind of ground sausage again! Also in the filling I added  lots of provolone cheese and pepperoni. Meat and cheese lovers, unite! The pizza dough recipe makes enough for two large 12″ strombolis so this whole recipe, including the filling is enough to make two. If you only need one, you can cut the filling recipe in half and divide the dough in half after it is prepared to freeze for later!

This Italian Sausage and Provolone Stromboli is the perfect appetizer for a party, get together, or even Thanksgiving. It’s sure to be a huge hit! Slice them and serve them up with a side of marinara or pizza sauce to dip in and prepare for the waves of compliments to come rolling in about how delicious they are!

If you are making homemade pizza dough, prepare it first. If you are using store-bought, roll out one of the crusts on a lightly floured surface into a large rectangle so it is ready to fill.

In a large skillet, brown and drain your sausage. Set aside.

On one side of the dough rectangle (one of the longer sides), layer 1/4 of shredded provolone cheese, then 12 slices of pepperoni, crumble 1/2 of the sausage on top of that and then top it off with another 1/4 of provolone cheese. One side should have filling, and the opposite side shouldn't have anything. With a pastry brush, brush the edges and the whole empty side with egg wash. Roll the dough up tightly cutting the ends and tucking them as needed to get rid of the excess dough that will accumulate. Place the stromboli on the prepared pan and brush the whole thing with egg wash. With a pairing knife, cut a few slits across the top to help release the steam. Repeat the same process for the second stromboli.

Once both strombolis are prepared and on the prepared baking sheet, bake for 10-15 minutes or until golden brown, rotating the pan halfway through if you notice they aren't browning evenly.

While the strombolis are baking, prepare dipping sauce. In a small saucepan set to low heat, combine tomato sauce, tomato paste, basil, oregano, onion powder, salt and sugar. Stir to combine and heat through for about 10 minutes. Slice up hot stromboli and serve with dipping sauce.

!*Notes:* *For the dipping sauce, you can use store-bought marinara or pizza sauce.

This is a sponsored conversation written by me on behalf of Johnsonville. The opinions and text are all mine.