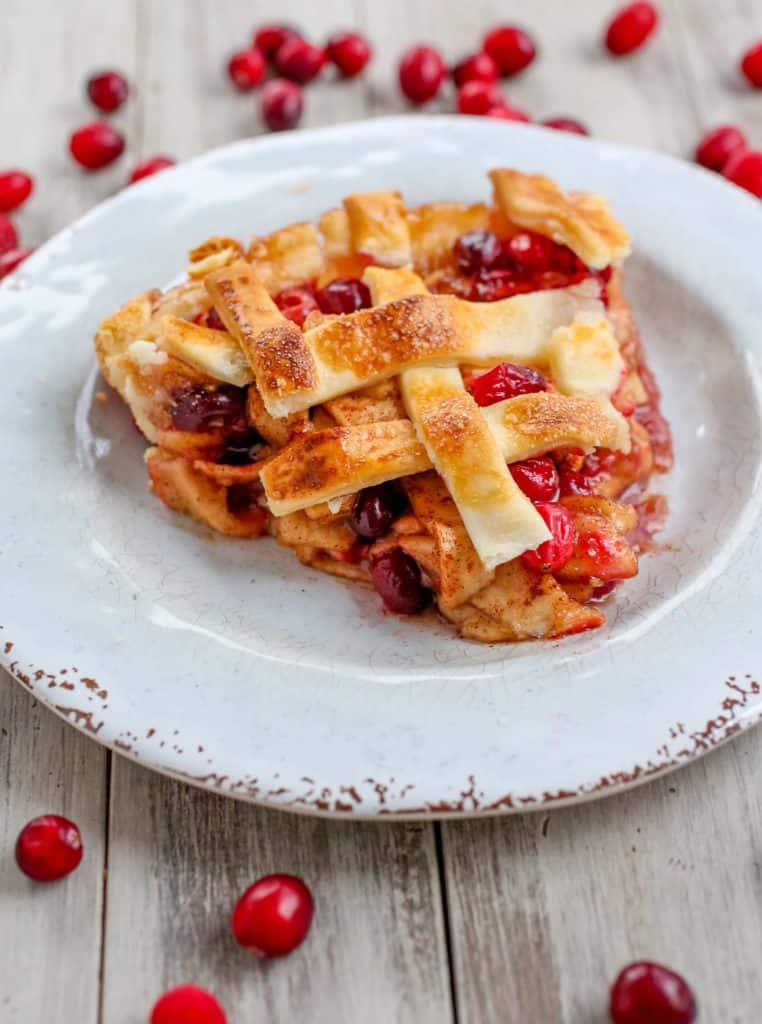 Can you guys believe that Christmas has come and gone already?! It was our little guys first christmas and it was the best one yet. I’m so in love with seeing the magic in John’s eyes – I can’t wait for Ryan to get a little older to enjoy all of the Christmas magic with his brother! Not rushing anything, though. I’m trying to soak up every second of newborn gushiness! 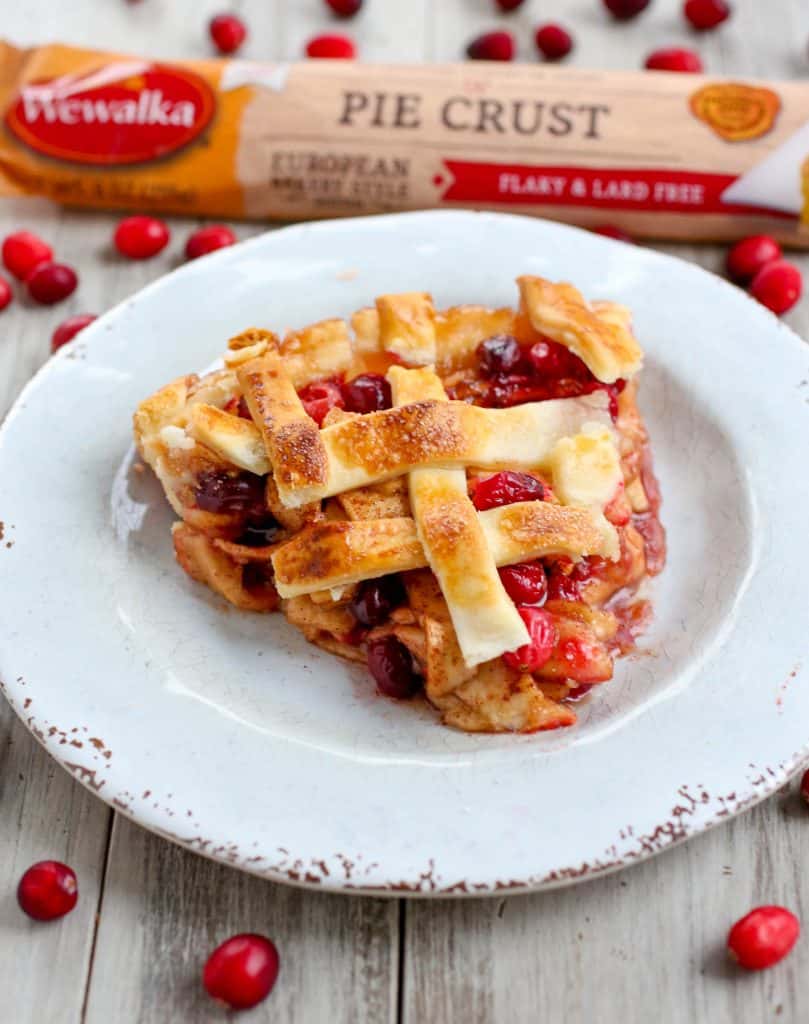 I have a delicious pie recipe for you guys today! This was totally inspired by the holidays. It’s just perfect for this time of year. It’s an apple pie made even better with cranberries mixed it to give it an extra layer and depth of flavor. I just love how the apples soften and the cranberries burst and ooze into the pie filing. 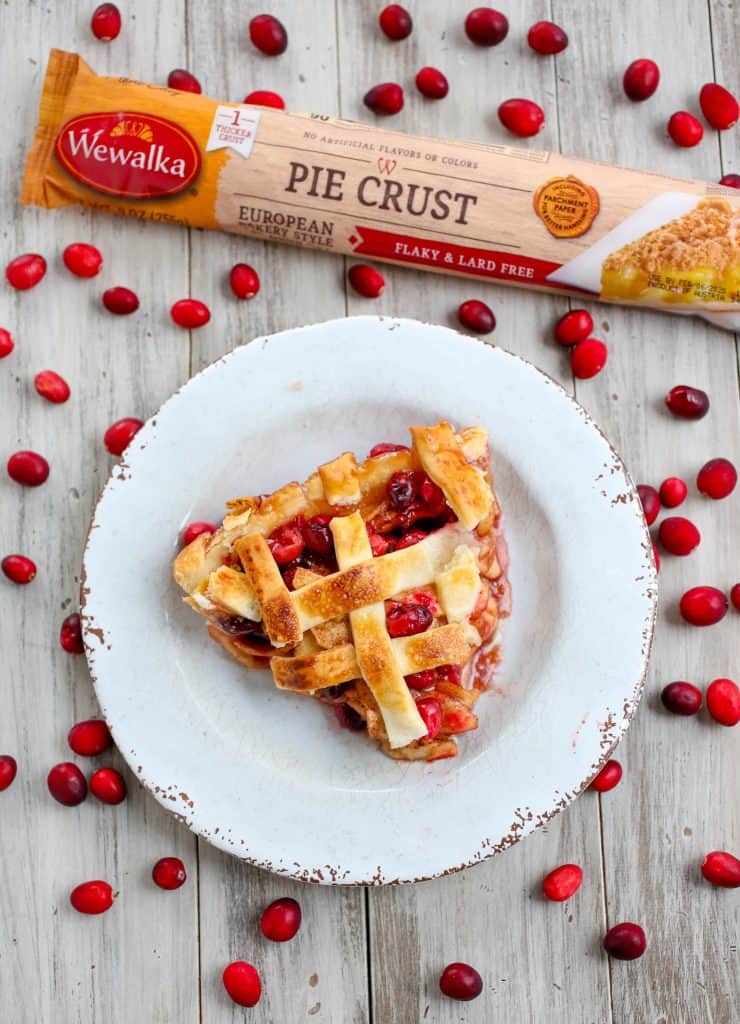 To prepare this pie, I started with my favorite store-bought Wewalka pie crust. Seriously, you guys, this pie crust is buttery, flaky and comes out so nice and crisp on top – just how pie crust should be. It truly is the best! These pie crusts come single in the package so you will need two packages. This is great for those times when you only need a bottom crust – no waste! 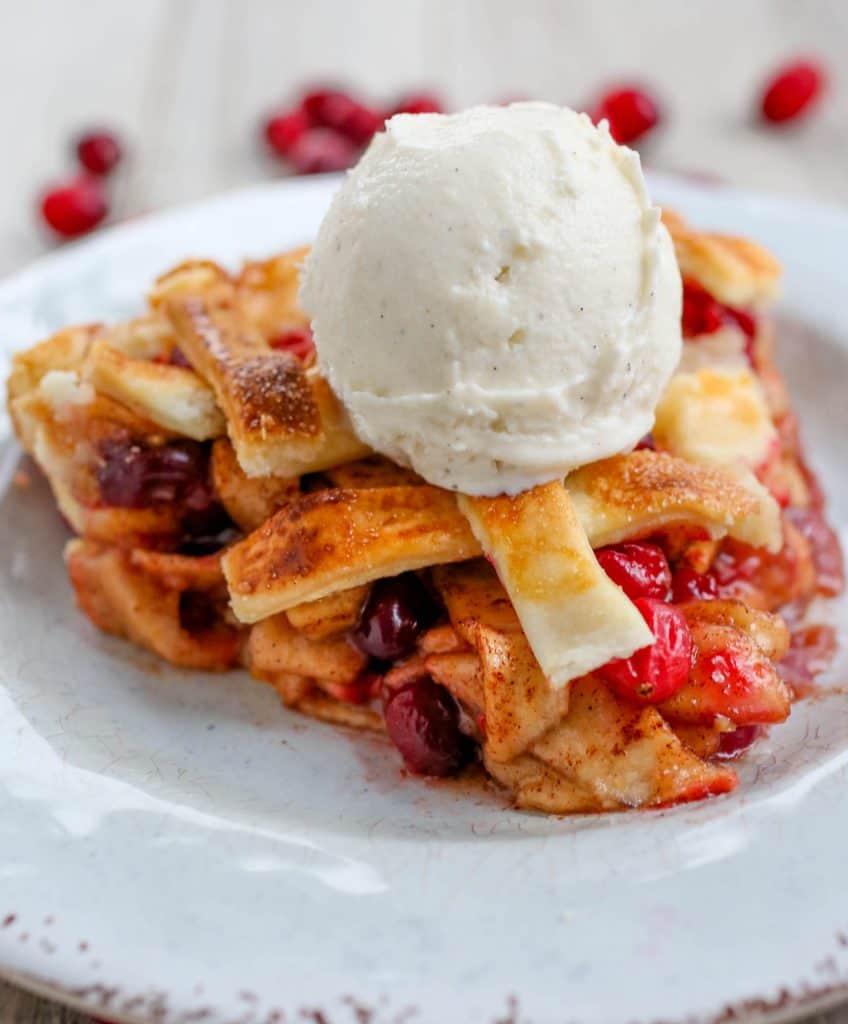 To make the filling, you’ll just mix everything together in a large bowl and make sure all fruit is evenly coated. I recommend baking the bottom pie crust first because it will get slightly soggy while baking if you don’t. Sometimes I skip this step out of pure laziness and it comes out fine but I prefer a nice crisp bottom crust.

Filling: Peel and core apples and cut into 1/4" slices. Toss the apples with lemon juice in a large bowl. Mix one cup granulated sugar, brown sugar, corn starch and spices together and pour it over apples. Add cranberries and toss until evenly coated.

To assemble the pie: Take the refrigerated Pie Crust Dough packages out of the fridge 15 min. before using to soften slightly.

Preheat the oven to 400°F. Unroll the Pie Crust Dough. With the help of the parchment paper, flip the dough into a 9-in. pan. Remove paper and press dough to bottom and sides. Bake for 8 minutes. Allow to cool slightly. Dump the filling into the warm bottom crust and spread it out evenly. Dot filling with small cubes of butter.

Create lattice crust (optional): Take the second pie crust and with a pizza cutter or sharp knife, cut into 1" strips. Assemble the lattice on top of the pie. Alternatively, you can place the entire sheet of pie dough on top of the pie - make sure to cut 4 vent holes in the center before baking. Beat egg and milk together and brush top crust. Sprinkle remaining granulated sugar on top.

Bake the pie on the lower rack and on a baking sheet until the crust is golden brown and the filling is bubbling, about 50 to 55 minutes. If the top or edges start to brown too quickly, cover with foil until end of baking time. Allow to cool on a cooling rack for 30 minutes to 1 hour so the filling can set up for easier slicing.