Make-shift cinnamon rolls made the easy way and you will not believe how amazing these Cinnamon Roll Crescents are!

When it’s nice out, I really try to take advantage of it. During the nice weather, it’s always good to have a little trick up your sleeve for yummy treat ideas that take only minutes to prepare so you’re in and out of the kitchen in no time! If you know me, you know how much I adore cinnamon rolls and now I don’t need to spend hours in the kitchen rising dough! And neither do you.

These “cinnamon rolls” are made easier with crescent dough or puff pastry and they have the same flavors you know and love about our beloved friend, cinnamon roll. These come SO close and the fact that they’re so easy to make is unreal.

Why these cinnamon roll crescents are the best ever

How to make cinnamon roll crescents

Christmas morning I always try to make some kind of special breakfast and normally we are out on Christmas Eve and we will be this year too. Since we won’t be home and I won’t have time to make a big batch of my traditional cinnamon rolls, I think these just may make an appearance! My big, soft and fluffy cinnamon rolls are ALWAYS a hit and always so worth the effort and these always get the same excitement.

You may enjoy these other cinnamon recipes:

If you make this recipe, I’d LOVE to know what you think below! I would so appreciate you leaving a star rating and/or comment. Also, please don’t forget to share a photo of your delicious finished recipe on Instagram or Facebook and give me a tag so I can see! 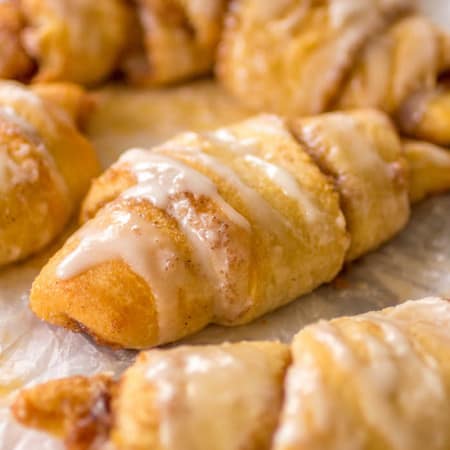